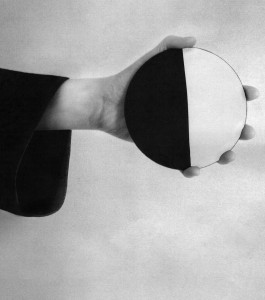 Most black and white cookies disappoint—this is a firmly-held belief formed through years of empirical study—and yet, we remain ardent fans of this humble deli staple, whose strongest case for consumption is generally its nostalgia-inducing identification with New York City. While that remains reason enough to love the black and white, it’s our conviction that with a bit of reinvention, this iconic form might put paid to both its gustatory and Proustian promises. But that's just where our interest in the B&W begins.

TOC's investigation of ambiguous objects has been ongoing for more than a decade, and it's our belief that the B&W cookie fits well to that index. After several years of (admittedly casual) research, we've uncovered no origin story regarding the B&W that stands up to rigorous examination. While some discussions of the ur-cookie look to the Upper East Side (the grandson to the founders of the now-closed Glaser's Bake Shop claims that the cookie was part of the original cast of confections offered by John and Justine Glaser when their shop opened in 1902), others point upstate, where Hemstrought's Bakery claims to have developed the proto-black-and-white “half-moon cookie” in 1920. This claim marks an unabashed challenge to Glaser's historiography, and suggests that the version associated with NYC is something like a fondant-slicked bootleg of Hemstrought's buttercream original.

Further complicating the search for a firm foundation to the B&W is its German doppelgänger—the similar, though typically mono-iced, Amerikaner—which, depending on your source, is either a hat-tip to WWII GIs who brought a taste for the cookie to Berlin, or a bastardization of a 19th-century invention known as the Ammoniakaner, named in reference to the use of ammonium bicarbonate as its leavening agent. Pace the claims of multigenerational bakeshops, recent research by Culinary Historians of New York member Stephen Schmidt suggests that the bilateral decoration technique may not have been a trademark of any particular baker, bakery, or cultural tradition, but more a result of the Victorian-era penchant for checkered patterns and contrasting layers crossing into the quotidian domain of sugary treats. Schmidt confesses that he believes “the black and white cookie was a commercial invention,” one that “capitalized on things that were in the air.”

All this is to say that perhaps the notion of authenticity is overrated, and often reactionary. Rather than hew to some purported essence, we'd much rather affirm invention, transformation, becoming—remaining attuned to what's “in the air.” Rather than attempting to pin the black & white to a fixed narrative, we prefer to approach it as an open form, an idea that circulates without origin, charting an itinerant path among a chain of iterations, none of which can claim authority or propriety. Fondant or buttercream? A bit of lemon or almond? Perhaps a thin glaze of apricot hidden between cake and icing? Well, yes. Yes!

In early 2020 we planned to host an event that would have involved making and sharing a substantial stock of black and white cookies along with a few bottles of amari. The pandemic intervened, and the project failed to materialize. In May of 2020, we did manage to disseminate a number of cookies through contactless drops to friends around Manhattan and Brooklyn, but this weekend marks the first occasion on which we're offering them in a public forum.